Menu
Log in
Register
Install the app
You are using an out of date browser. It may not display this or other websites correctly.
You should upgrade or use an alternative browser.

"On the above date and time I, Senior Deputy Murphy, responded to MRPD to process Mr. Garrett Stevens who was turning himself in on an arrest warrant. Mr. Stevens arrived with Warden Mustang and Deputy Warden Nixon and was brought to the MRPD holding cells to await a lawyer. With no lawyers available, Raiden Haugensen from the DA's office arrived to explain the charges to Mr. Stevens. Mr. Steven's wished to plead not guilty, he was fined and released per Mr. Haugensen's approval due to the extended amount of time spent in the holding cells."

For the record I have hired @Teddy Roberts as my legal representation for this case.

After some consideration I hereby dismiss @Teddy Roberts as my represenation on the grounds of Inadequte counsel, at this time I will seek new counsel but for the time being if possible I wish to make 3 motions myself in the interest of moving the process forwards:

1. I motion to supress Exhibit 1, grounds for supression are: Lack of physical camera in the video that is recorded by an individual wearing plain clothes, this brings into question the validity of the warrant written based solely on word of mouth, in addition to this there is a whole 2 minutes of muted audio at the start where anything could have been said.
2. I motion for discovery for the entire audio from the 9 minute and 10 second recording that includes the 2 minutes of missing audio.
3. I also motion to dismiss the charges on the grounds that the evidence brought forward for the reason stated above, would be insufficient for a warrant based solely on word of mouth of Miss Carson.

I wish you nothing but the best of luck going forward Mr. Stevens. Sorry I could not be of more help to you on this matter.

Finding: The Supreme Court of San Andreas concludes there is a legal basis for this trial.

Disposition of the Defendant(s): Not Guilty

Defendant's Legal Counsel: Mr. Stevens is waiving his right to counsel and is self representing.

Discovery Period: Discovery will begin now and ends in 5 days on Monday, September 6, 2021 at 2259hr. All first-hand witnesses, that cannot attend this trial, must provide written statements describing the incident through the Prosecutor or Defense Attorney. Make sure you publish them on this docket for the opposing counsel to see.

Trial/Sentencing Date:
Please go to the following link: COURT CASE TIME & DATE Select the times you are available between the dates of September 8 and 11th. I will then find the best time and announce the trial date/time in this docket. Please let me know asap if none of the times work.

1. Motion to supress Exhibit 1 - Denied as is evident from the provided evidence, this is an audio recording of a tape recorder placed on a desk before "record" is pressed"

2. Motion for discovery for the entire audio from the 9 minute and 10 second recording that includes the 2 minutes of missing audio - Pending. Please specify reasoning and why this would be relevant to the case if all the information is in the evidence already submitted.

3. Motion to dismiss the charges - Denied This court finds that there is a legal basis for trial. The validity of the warrant may be contested in the court of law if needed.

As you are self representing this means that you are bound by the same conduct and ethics as an attorney would be. As such this court fines you $3,000 for Violating Rules Of Procedure and posting motions to a docket before a judge had picked up the case and determined whether to proceed to trial.

Your fine must be paid within 48 hours to a Judge or court secretary.

I apologise if I have spoken out of turn your honor but I do ask you point me to where said "code of conduct" is written regarding motions being made before a judge has responded as I seem to be failing to find it after searching multiple documents in the DOJ library and see this as an opportunity to be educated for future reference should I require it, I will pay the fine shortly.


IAmTheValeyard said:
Defendant's Legal Counsel: Mr. Stevens is waiving his right to counsel and is self representing.
Click to expand...

I once more state for the record that I have dismissed previous counsel due to their inadequte counsel, I however am not waiving my right to it, please note on record that I was attempting to temporarily self-representing while I seek new counsel, my timezone makes it hard to find an attorney that is readily available when I am.

Your honour, I apologise for the multiple posts in such a short period of time, due to the short time period for discovery I wish to make the following subpoenas while I await the response from an attorney I am seeking to employ as representation.

I hereby subpoena the following:

A copy of the arrest warrant dated 18th August 2021 for myself, Garrett Stevens, both the original and the modified (Redacted) version that was on the MDT at the time of my arrest for transparency of what was presented to the officers who served it.

I hereby subpoena the entire 9 minutes and 13 seconds of audio that includes the two minutes missing from the start of the recording to allow transparency of what was said in the 2 minutes that are missing, this subpoena is in regards to you requesting my reasoning for it originally, in order to show that nothing was hidden in that audio recording prior to the sound starting.

I hereby wish to submit the following image into evidence as my Exhibit 1, the following is of the Department of Justice Warrant Guidelines where I have highlighted that which I wish to address: 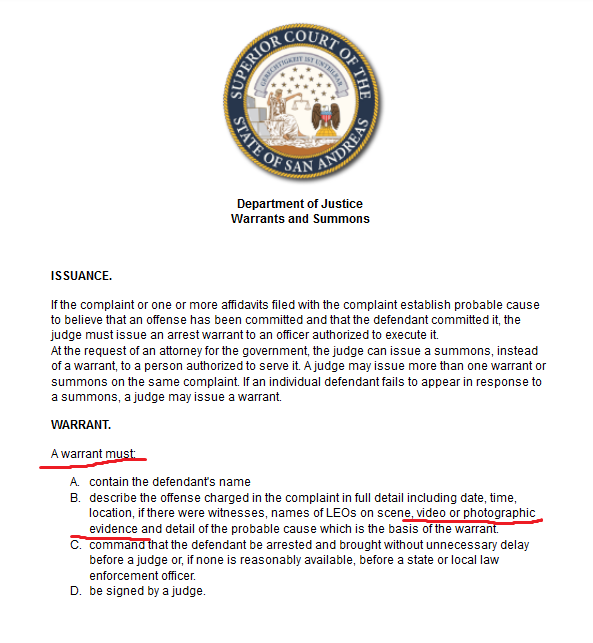 Reasoning for submission of my Exhibit 1: Above is the current Guidelines set by the Department of Justice for any and all warrants to be approved, as shown by my highlighting of two parts a warrant MUST include a Video or Photographic to have enough probable cause for approval.

I hereby motion for discovery of any and all additional evidence relevant to the case that has not yet been disclosed in this docket by the prosecution.


Respectfully your honour, I hope you will take the time to consider what I have asked and approve of the above.

You are either self representing or you are not. This court is not a circus in which you can flippantly go back and forth to suit your own agenda.

I will however accept Exhibit 1 into evidence once you relabel the Exhibit as there is already an Exhibit 1 submitted to the court.

Your honour I hereby resubmit the following as Exhibit 2

Your honour, at this time I have hired Chance Noonan as my defence counsel @skinner

At this time your motion to appoint Chance Noonan will be denied based on the following factors
If Commissioner Noonan wishes to argue the charges or not press charges under his right to Chapter 25 then I would suggest that he merely talk with the District Attorneys Office.

Mr Stevens if you are having issues with finding an attorney then the state will provide one to you free of charge.

I see no conflict of interest in my representation for Mr. Stevens.

1. Me being a part of any chapter 25 meeting or discussion holds no weight or bearing to someone else's alleged breach of such information. This was not my order of chapter 25 this was your chapter 25 order, Your Honor.
2. My position as Commissioner is to protect and serve every public servant who serves the State of San Andreas. Mr. Stevens is not under my direct supervision nor would it matter if he was. I do not oversee SADCR nor the LSFD. I also am not defending against any of the departments of which I directly oversee as the prosecuting party is the State, represented by the District Attorney's Office, in which I do not have any direct control or power over in my position as Commissioner.

My name is Chance Noonan bar card 20-153 for the defense, Your Honor.

Just to be clear, before I make any further decision, the following individuals who are witnesses for the state are not in the employ of the Department of Public Safety under the Commissioners Office?

Those individuals are currently employed by the Department of Public Safety but it is my understanding that they simply served a warrant and have not conducted any other actions pertaining to the case or investigation itself.

The evidence submitted in Exhibit 1 states at approximately 5 minutes and 28 seconds that "Sergeant Knight" was directly involved in the situation. That he was indeed the individual who first took the case to investigation after being made aware of the situation. Therefor he is not just a member of law enforcement who was serving the warrant.

I am still awaiting scheduling times from all parties.
Please have this updated within 24 hours

I'm afraid that none of those times are suitable for me your honour due to the lateness of them and my other circumstances.

((I'm caring for my mum and evenings are when she needs me the most.))

Please inform of a suitable time frame that works for you. If court cannot be scheduled within the 14 days under the Speedy Trial Act due to you not being able to attend a date then you are not protected by said act.

Given that this docket was raised before the revision to the act your case still falls under the previous limitations set forth by the act.

Anytime after 2pm but before 7pm BST would be preferred your honour, so long as it is not Monday 13th as I have other arrangements that day.

And if it's not too late your honour, I am going to ask that you assign a lawyer if you can as I have tried to hire 4 now and the there is either no response after our initial discussion or they are too busy to consider taking the case.
You must log in or register to reply here.
Share:
Facebook Twitter Reddit Pinterest Tumblr WhatsApp Email Share Link
Top